Actually, since Java 5 the volatile keyword guarantees more than just that volatile variables are written to and read from main memory. I will explain that in the following sections.

The Java volatile keyword guarantees visibility of changes to variables across threads. This may sound a bit abstract, so let me elaborate. 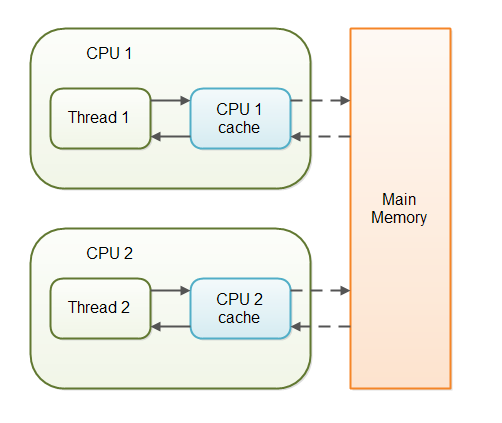 With non-volatile variables there are no guarantees about when the Java Virtual Machine (JVM) reads data from main memory into CPU caches, or writes data from CPU caches to main memory. This can cause several problems which I will explain in the following sections.

Imagine a situation in which two or more threads have access to a shared object which contains a counter variable declared like this: 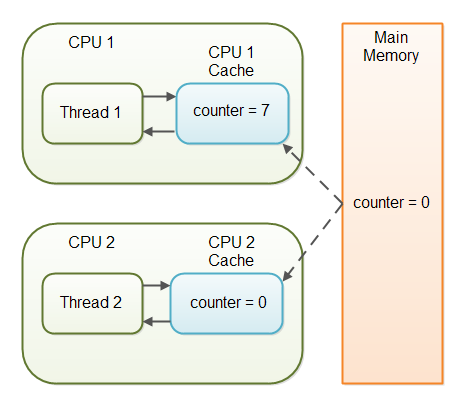 The problem with threads not seeing the latest value of a variable because it has not yet been written back to main memory by another thread, is called a “visibility” problem. The updates of one thread are not visible to other threads.

Declaring a variable volatile thus guarantees the visibility for other threads of writes to that variable.

These statements require a deeper explanation.

Look at this example:

Developers may use this extended visibility guarantee to optimize the visibility of variables between threads. Instead of declaring each and every variable volatile, only one or a few need be declared volatile. Here is an example of a simple Exchanger class written after that principle:

However, the JVM may reorder Java instructions to optimize performance, if the JVM can do so without changing the semantics of the reordered instructions. What would happen if the JVM switched the order of the reads and writes inside put() and take()? What if put() was really executed like this:

Notice the write to the volatile variable hasNewObject is now executed before the new object is actually set. To the JVM this may look completely valid. The values of the two write instructions do not depend on each other.

However, reordering the instruction execution would harm the visibility of the object variable. First of all, Thread B might see hasNewObject set to true before Thread A has actually written a new value to the object variable. Second, there is now not even a guarantee about when the new value written to objectwill be flushed back to main memory (well – the next time Thread A writes to a volatile variable somewhere…).

Look at this example:

That is basically the meaning of the Java volatile happens before guarantee.

volatile is Not Always Enough

In the situation explained earlier where only Thread 1 writes to the shared counter variable, declaring the counter variable volatile is enough to make sure that Thread 2 always sees the latest written value.

The situation where multiple threads are incrementing the same counter is exactly such a situation where a volatile variable is not enough. The following sections explain this case in more detail.

Imagine if Thread 1 reads a shared counter variable with the value 0 into its CPU cache, increment it to 1 and not write the changed value back into main memory. Thread 2 could then read the same countervariable from main memory where the value of the variable is still 0, into its own CPU cache. Thread 2 could then also increment the counter to 1, and also not write it back to main memory. This situation is illustrated in the diagram below:

When is volatile Enough?

As I have mentioned earlier, if two threads are both reading and writing to a shared variable, then using the volatile keyword for that is not enough. You need to use a synchronized in that case to guarantee that the reading and writing of the variable is atomic. Reading or writing a volatile variable does not block threads reading or writing. For this to happen you must use the synchronized keyword around critical sections.

As an alternative to a synchronized block you could also use one of the many atomic data types found in the java.util.concurrent package. For instance, the AtomicLong or AtomicReference or one of the others.

The volatile keyword is guaranteed to work on 32 bit and 64 variables.