A livelock is a recursive situation where two or more threads would keep repeating a particular code logic. The intended logic is typically giving opportunity to the other threads to proceed in favor of ‘this’ thread.

A real-world example of livelock occurs when two people meet in a narrow corridor, and each tries to be polite by moving aside to let the other pass, but they end up swaying from side to side without making any progress because they both repeatedly move the same way at the same time.
From Oracle reference docs:

For example consider a situation where two threads want to access a shared common resource via a Worker object but when they see that other Worker (invoked on another thread) is also ‘active’, they attempt to hand over the resource to other worker and wait for it to finish. If initially we make both workers active they will suffer from livelock. 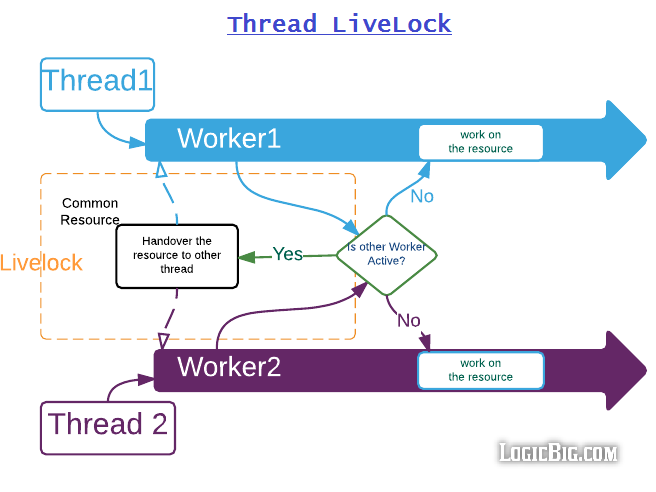 There will be never ending recursion of the following output:

In above example we can fix the issue by processing the common resource sequentially rather than in different threads simultaneously.

Just like deadlock, there’s no general guideline to avoid livelock, but we have to be careful in scenarios where we change the state of common objects also being used by other threads, for example in above scenario. the Worker object.