Of course, not all of it, but history showed that Stream API featured a few interesting bugs/deficiencies that can affect anyone still residing on JDK 8 and JDK 9.

Unfortunately, it turns out that Stream#flatMap was not as lazy as advertised, which allowed for several crazy situations to exist.

For example, let’s take this one:

In JDK 8 and JDK 9, the above code snippet spins forever waiting for the evaluation of the inner infinite Stream.

One would expect O(1) time complexity from a trivial operation of taking a single element from an infinite sequence — and this is how it works as long as we don’t process an infinite Stream inside  Stream#flatMap:

What’s more, it gets worse if we insert some additional processing after a short-circuited Stream#flatMap call:

Now, not only are we stuck in an infinite evaluation loop, but we’re also processing all of items coming through:

Imagine the consequences if the process() method contained some blocking operations and unwanted side-effects like email send outs or logging.

The internal implementation of Stream#flatMap is to blame, especially the following code:

As you can see, the inner Stream is consumed eagerly using Stream#forEach (not even mentioning the lack of curly braces around the conditional statement. Ugh!).

The problem remained unaddressed in JDK 9, but luckily, the solution was shipped with JDK 10:

This one is directly connected to the above one and  Stream#flatMap’s unwanted eager evaluation.

It works just as expected.

Now, let’s take the flattened the Stream and simply keep taking elements until we encounter “4:”

Again, it works just as we expected.

Let’s now try to combine these two; what could go wrong?

That’s an unexpected turn of events and can be fully attributed to the original issue with Stream#flatMap.

Some time ago, I did run a short poll on Twitter, most of you were quite surprised with the result: 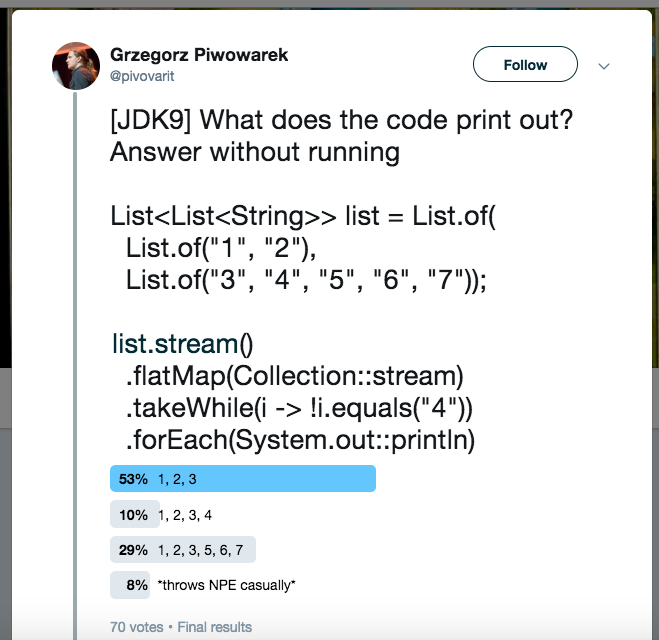 There’s one commonly-known hack (that you should not be using since it relies on internal implementation details of Stream API) that makes it possible to hijack parallel Stream tasks and run them on the custom fork-join pool by running them from within your own FJP instance:

If you thought that you managed to trick everyone already, you were partially right.

It turns out that even though tasks were running on a custom pool instance, they were still coupled to the shared pool – the size of the computation would remain in proportion to the common pool and not the custom pool – JDK-8190974.

So, even if you were using these when you shouldn’t have, the fix for that arrived in JDK 10. Additionally, if you really need to use Stream API to run parallel computations, you could use parallel-collectorsinstead.